HAVE A READ OF OUR BLOG

Keep up to date with Cumberland Place news and find our tips and tricks for student living.

Southampton has a rich history as one of the grandest passenger ports for transatlantic passenger travel of the golden age.

The giant liners such as the Queen Mary were built in the shipyards of the city, and the Titanic set sail from here.

Although it hasn’t quite managed to recreate the golden age Southampton is still a very busy port and the rich history is everywhere you turn.

As you begin the chapter of your life living in our luxury Southampton student accommodation we wanted to point you in the direction of some of the greatest landmarks in this city by The Solent.

The Bargate is the beating heart of Southampton; the Grade I Listed medieval gatehouse was constructed in Norman times and is the main gateway to the city centre, as part of the stunning town walls.

The Bargate Monument has become a symbol of the city, with the monument building being used for arts exhibitions, as an events space and there is also a welcoming area opposite the Bargate where the weekly market is held, as well as annual events such as the Southampton Christmas Festival in November and December.

The brand new Bargate Development will ensure the medieval town walls are the centrepiece of the action, and they are a stunning architectural marvel that is well worth checking out as a new resident in Southampton. 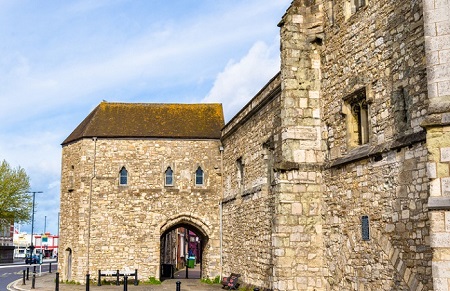 The Bargate and Eastgate sections of the wall date from 1180, with the Western walls completed in 1380. 13 of the original towers and six of the original gates are still standing, which makes it the most complete medieval town walls in the UK.

The third longest stretch of unbroken city can be viewed from the Western Esplanade, where you can also find the Wind Whistle Tower. St Michael’s on Castle Way is the only remaining medieval church in the city. Southampton provides you with some wonderful walks around its historic landmarks.

Tudor House in St. Michael’s Square is another example of the fine medieval architecture in the city, and it is one of the top landmarks in Southampton. 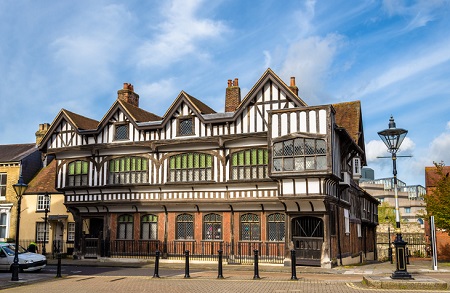 The building was constructed in the late 15th century for a wealthy merchant family and is now a museum housing exhibits from the Edwardian and Victorian eras, and exhibitions that cover over 900 years of local history.

Another must-see Southampton landmark is the Medieval Merchant’s House on French Street. It was built in 1290 and is the only surviving example of this type of townhouse, with its period furniture, wall hangings and architectural quirks from the period.

4. Green Spaces and Port Side Walks

Southampton is a fantastic place to watch the passenger ships and the cargo ships that come into the port.

The Hythe Ferry service runs across the 20-mile Solent strait on a regular basis, connecting passengers with the Isle of Wight. Situated on the peninsula between the Test and Itchen rivers, Southampton is a city that has a large, beautiful and natural harbour that makes it a stunning natural landmark.

With the New Forest and the Isle of Wight within easy reach, as well as the nearby Itchen Valley Country Park, there is always a countryside hike to enjoy. Within the city itself there is also plenty of beautiful green space to explore, including Southampton Common.

With such a rich maritime history it is no wonder that another great Southampton landmark is the SeaCity Museum. 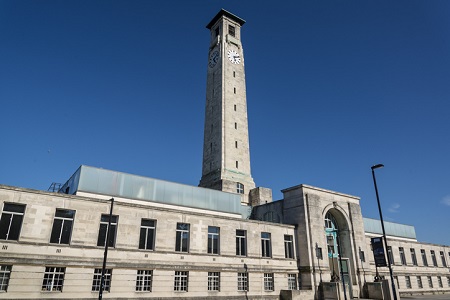 Here, you can delve into the stories of people who have arrived in the port over many centuries, as well as those who departed from the city. There is also an interesting section outlining the city’s link to the Titanic – it sailed from Southampton port in 1912.

Following the maritime theme, the SS Shieldhall is the largest working steamship of its kind in Europe. 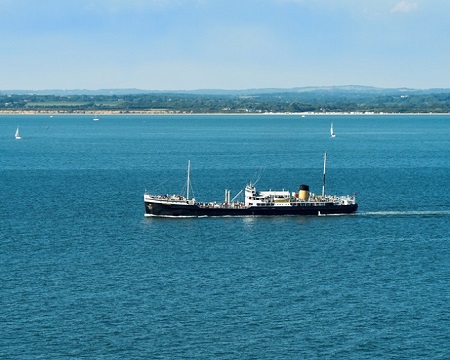 It is an impressive vessel that was built in 1954 as one of the Clyde sludge boats and has been carefully and lovingly restored to become an educational highlight in the city. It can regularly be seen at the Southampton Maritime Festival, which celebrates the historic nature of the maritime history in the city.

At Cumberland Place we are setting exciting new standards for student accommodation in Southampton.

Living at Cumberland Place provides you with the perfect home away from home to explore this beautiful city and its many great landmarks.

You’ll be living in luxury, in a central Southampton location that leaves you within walking distance of the university and all the amenities and culture on offer.

We provide wonderful communal and social spaces for you to make new friends and become part of a global community.

Seeing your son or daughter leave for university is a landmark moment for you as well as them. Find out more about how they will be residing in a safe, secure environment that will enable them to enjoy their university experience.

Your safety and wellbeing is our top priority, and we pride ourselves on delivering a first-class standard of security. On-site teams and CCTV surveillance offer additional reassurance.

The Cumberland Place is situated in Southampton, with two leading universities just a matter of minutes away on foot. You are perfectly placed to enjoy all that Southampton has to offer.

Seeing your son or daughter leave for university is a landmark moment for you as well as them. Find out more about how they will be residing in a safe, secure environment that will enable them to enjoy their university experience.

Your safety and wellbeing is our top priority, and we pride ourselves on delivering a first-class standard of security. On-site teams and CCTV surveillance offer additional reassurance.

The Cumberland Place is situated in Southampton, with two leading universities just a matter of minutes away on foot. You are perfectly placed to enjoy all that Southampton has to offer.

Please note that by using cumberland-place.com you agree to the use of cookies which assists us to enhance your user experience.